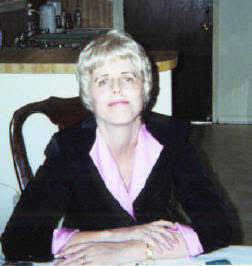 July just keeps getting better. Joining us today is author and editor Ayn Hunt. Intrigued by ghosts and hauntings, Ayn writes gothic novels and teaches Gothic writing online for Coffeehouseforwriters.com - http://www.coffeehouseforwriters.com/index.html. She is also the editor of Haunted Happenings, a free nonfiction newsletter which explores the nature of ghosts and all things related to them.

Welcome to my blog, Ayn. I’m thrilled to get this chance to speak with you.

Thank you. It’s great to be here.

Let’s start off by getting to know you better. When did you first decide to become a writer? What was the first piece you sold? Do you have a mentor or a source of inspiration?

I can’t remember when I didn’t want to become a writer. But I took it slow. I took journalism classes in high school because they didn’t offer creative writing, then I did my journalism internship after the second year of college. When I’d accrued 60 hours of college, I dropped out to get married and became a freelancer for various newspapers and magazines.

The first article I sold was in 1969 about the 60’s music explosion. Back then, we had the Grass Menagerie and The Hut on the beach in Galveston, Texas which had rock bands, plenty of beer, and a huge dance floor. I interviewed kids, the managers of the dance places and a few musicians for it.

It wasn’t until 20 years later when my own daughter was in college, that I bought a computer and decided to tackle writing my true love, novels. But when I was nearly done with my first one, Unwilling Killers, I was sure it wasn’t any good. Only after my daughter came home one week-end and secretly read it and told me to finish it so she could find out the ending, did I send it off. It’s a Gothic Mystery, and was published by PublishAmerica in 2002.

I don’t have a mentor, but I have a great source of inspiration. It’s the huge picture of golden water lilies that my late aunt painted for me which overlooks my desk. She was the only one in the family who believed I had the talent and perseverance to become a published writer. Sometimes I can smell her signature scent of Chantilly when I’m writing, as if her spirit is here, rooting me on.

This is my favorite question to ask because I love to hear about how other writers work. What is your writing process like? Do you write every day? Is there a time of day when you are more productive than others?

I have to write every day. I’ve found out if I don’t, it’s hard to get going again.

I usually get up around 3 or 4 a.m., because that’s when I’m most creative. I grab a cup of coffee and rewrite what I’ve done the day before on my current work in progress. After that, I take a short break, then write anywhere from 7 to 10 new pages. Around 11, I eat lunch then take a nap for an hour or so. During the afternoon, I write emails and promote.

I have to ask, which came first—-your curiosity about ghosts or your desire to write Gothic novels?

My curiosity about ghosts came first when I nearly collapsed when I saw a man I thought was a burglar. But when he walked through the wall in our dining room, I knew he was no ordinary criminal. Talk about being scared, I was petrified! During the ensuing months, I started finding out everything I could about ghosts, especially since the same one kept popping up in various parts of our house, scaring the wits out of me.

Once I realized he wasn’t going to harm me or my daughter or husband, I changed my first novel Unwilling Killers from a straight mystery into a Gothic.

You’ve had three Gothic novels published (Unwilling Killers, Obsessed, and The Haunting). Can you tell us a bit about each of them? Where can readers find them?

Wings ePress, Inc. The Hauntingis about two women who get stranded in an old haunted house along with a psychotic killer and several territorial ghosts.

Unwilling Killers is about a young woman who stays in a haunted house to find the identity of a murderer, only to find herself the target.

Obsessed is out of print at the moment.

In addition to your novels, you’ve written several articles about Gothic Mysteries, ghosts and hauntings, and how to perform research for stories involving these elements. What kind of feedback have you received on these articles? Have you ever had someone contact you with negative feedback about any of them?

Most of the feedback has been positive. When I’ve done on-line chats, they’ve been filled to capacity and I’ve always been asked back. And the hosts of the radio shows I’ve appeared on have been enthusiastic too. I set a record for a class I did about them for an RWA group. The president said they’d never had as many participants sign up for a class before. So, all in all, it’s been positive.

How did Haunted Happenings—-your free nonfiction newsletter-—come about? What does it offer? How can people subscribe?

There’s a lot of research being conducted about ghosts now too. The field is growing quite advanced with scientists in various fields conducting it. My newsletter features these new discoveries, haunted hotels, and sometimes true ghost stories from readers. For Christmas, I do a special edition featuring ghosts and facts associated with that holiday. 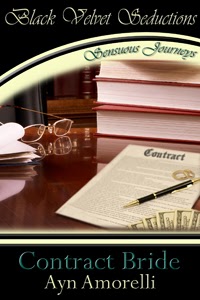 It’s free and comes out 3 to 4 times a year by email. People can subscribe by going into my website at http://www.AuthorsDen.com/aynhunt. There’s a little box to click on.

Let’s switch gears now and chat about your hot and spicy romance novel Contract Bride, which was written under the pseudonym Ayn Amorelli and published by Black Velvet Seductions - http://blackvelvetseductions.com/Contract%20Bride.html
I’ve read the first chapter of this novel and am totally intrigued. Can you tell us more about this story?

Contract Bride is about a confirmed bachelor who stands to inherit $20 million if he gets married and has a baby within the year. Since it’s March, that doesn’t give him much time.

It was a best seller at http://www.fictionwise.com/for six consecutive weeks, shooting up to the top 5 the first day of publication.

Before I begin a new story, I get to know my characters well. I ask them questions, think about them all the time, dream about them, getting inside them, seeing the world as they do, breathing life into them until I become their psychic twin. Once they become as real to me as my husband and daughter are, I sit down to write their story.

You said in an interview with Writers Manual that you “like sex that’s portrayed realistically.” Can you expand upon this statement? What advice can you give to writers who want to portray realistic sex in their novels?

In romances I read, the sex scenes have to keep me in the world of the story to hold me there. The only way I stay there is when I read exactly what the characters are doing. Nothing shocks me back to reality faster than a euphemism that I’m supposed to guess the meaning of.

Sex is all about the emotions. It’s about feelings. About trust. About giving yourself to another without holding anything back. My advice is to make it as emotional an experience as both you and your characters are capable of.

Censorship can be a touchy issue in the writing industry. It is also something that I am especially interested in. There are groups out there that would censor books such as Contract Bride. How do you feel about this? Do you believe every novel has a place in the world—no matter the content?

A writer’s tools are words. And words make people think, envision, create. Anything that would take the rights away from people to think, envision and create should itself be censored.

If you have had any negative experiences with prejudice against your books, how have you addressed them? Do you have any advice for other writers on how to handle such situations?

One person confused my female character, Kayla with me, thinking she, apparently was a fake name and I was her. After wondering about her mental health, I wasn’t exactly ecstatic. But I ignored her. I think we choose our battles. I choose not to engage in that kind. My advice is not to stoop to the level of those who waste precious energy on something negative.

Now, onto the fun stuff--what’s up next for you? Is there any exciting news you wish to share with the readers here?

I’ve completed a fifth book, The Wayward Governess, an historical romance, a Regency, and am writing my 6th.

I also have a weekly interactive writers chat at AOL, called Hunt’s Corner. It’s on every Sunday evening at 8 p.m. CST. I usually pick a topic, which sometimes we even discuss. I like the give-and-take of chats.

August 28, 29th, and September 1st, I’m going to be on three panels for Sormag.com’s online conference.

Then in September, I’m giving three workshops for the Romance Galleria.com.

Thank you, Ayn for sharing so much about yourself and your work with us today. I wish you continued success.

Thank You for interviewing me. I've really enjoyed it.
Posted by Cheryl at 7:05 PM